The Star Signs Most Likely to Have an Office Romance 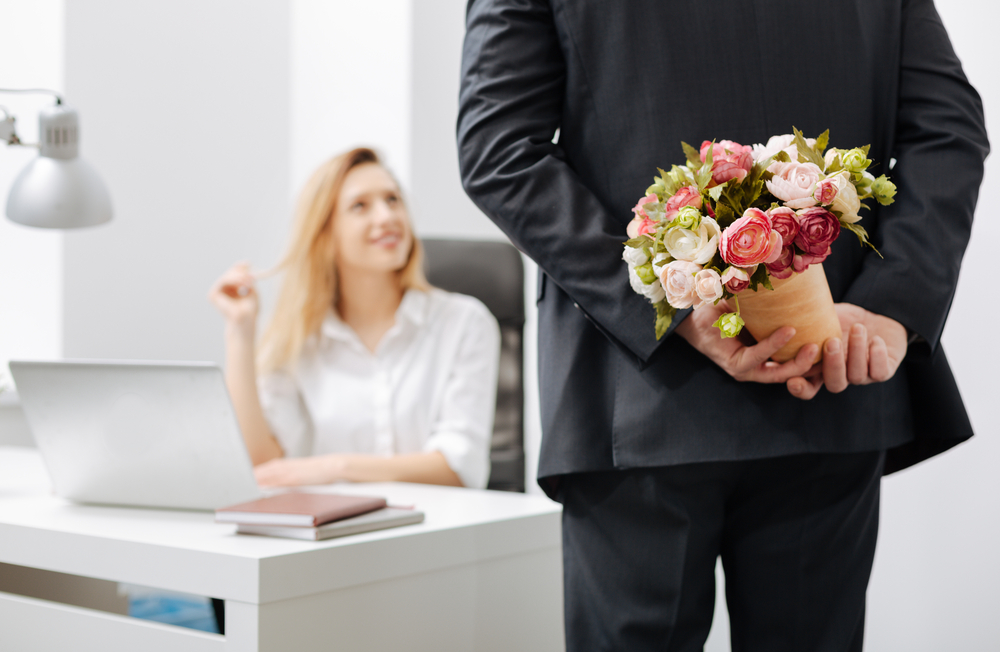 Many of us meet our soulmates through mutual friends, a night out, or even via online dating apps, but how many of us meet our partners at work? According to research, at least 48% of us will date a fellow employee at some point in our professional lives, despite nearly half of employers discouraging workplace dating.

This got the team at PsychicWorld.com thinking: could it be possible that some of us are more astrologically inclined to meet our partners at work than others? We surveyed 2,569 people and asked them whether they have had an office romance before, whilst also analysing their star sign traits to see who is most likely to have an office romance.

Which star signs are most likely to have a workplace romance? 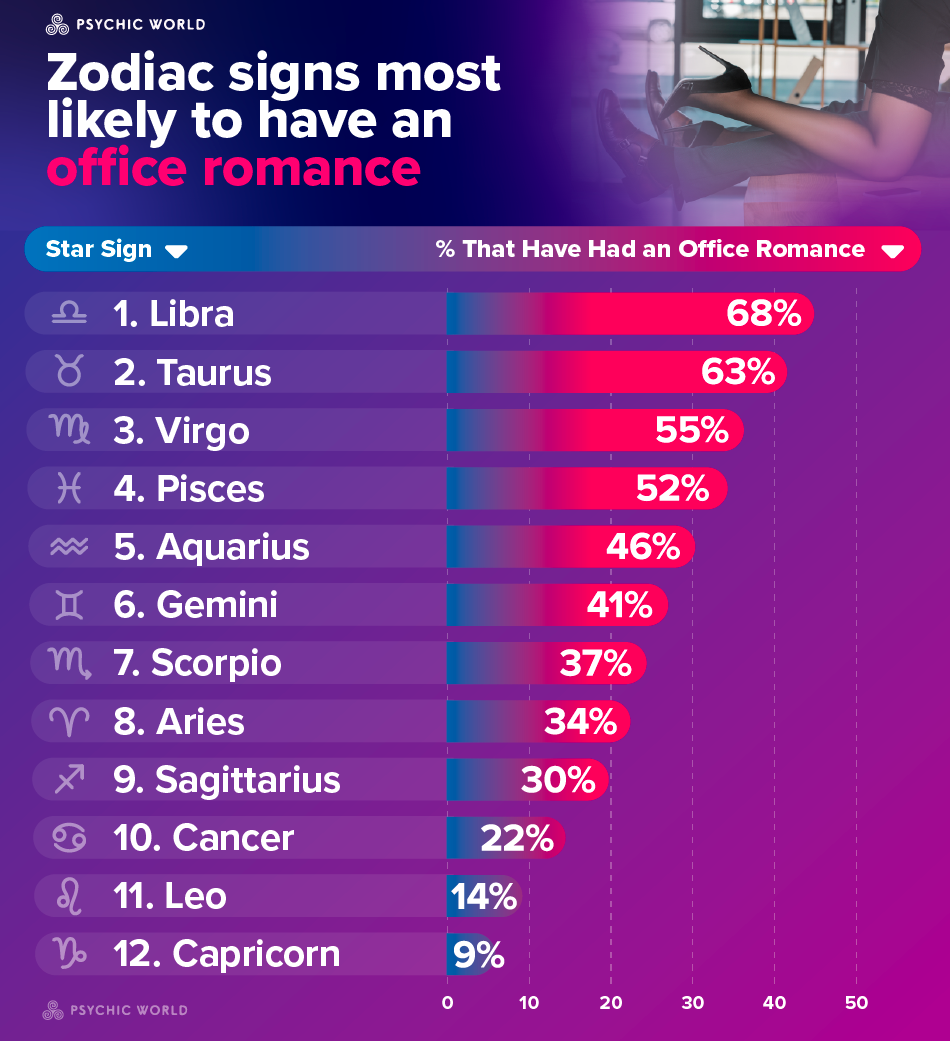 In first place is Libra, with a staggering 68% of respondents admitting to having an office romance. This star sign is ruled by Venus, the Goddess of Love, so it should come as no surprise that Libra’s have the most office romances of all signs!

Libras are known for wearing their hearts on their sleeve and are willing to throw caution to the wind in the name of love, so it’s unsurprising that their office romances often blossom into a long-term relationship with a co-worker – alongside Taurus and Pisces signs.

In second spot are Taurus’s, with 63% confessing to dating a colleague before. Despite being known for their work ethic and being dependable, they are not above sneaking around the office for a “hook-up” with a colleague! But their easy-going nature means they are happy to date in secret to avoid any potential problems arising at work.

In fourth spot is Pisces – a star sign known for being romantic and in love with the idea of finding “The One” – with half (52%) saying they have engaged in an office romance before.

Those born under the Pisces star sign are said to be passionate and intense, which is why this sign is one of the top 5 signs most likely to have an office romance – and one that will last and even lead to marriage in some cases!

46% of Aquarians stated they have had an office romance with a colleague before – and it’s no surprise as the ‘free love era’ was named “The Age of Aquarius”.

As this sign is known for being highly independent, Aquarius’s prefer to keep things light-hearted and flirty, opting for a fling rather than committing to a long-term relationship, like Pisces and Libra.

4 in 10 Geminis (41%) have experienced an office romance, coming in sixth spot! Despite this, Geminis are known for being inconsistent and getting bored easily, which often leads to them having on-off relationships with their colleagues – both romantically and as friends – so when it comes to office romances, you can expect some drama to follow… 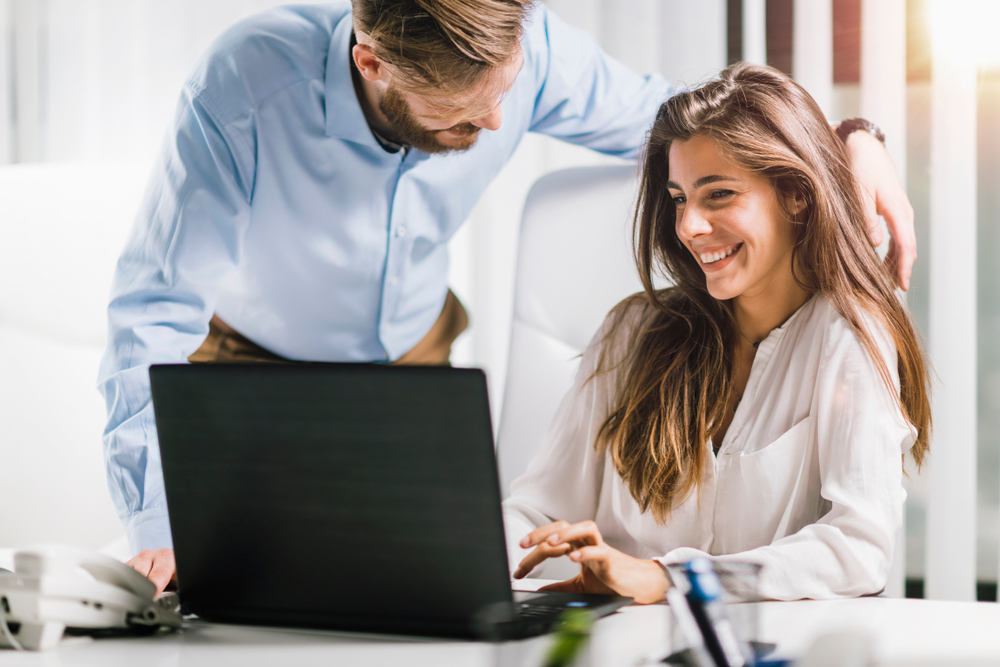 SCORPIO – “The Game of Love”

In seventh are Scorpios, with 37% of respondents admitting to having an office romance with a colleague at work. This star sign loves “a bit of fun” and enjoys driving their partner wild with desire and lust, so you are more likely to see Scorpios having one-night stands and flings with their co-workers, as opposed to a relationship.

Aries wear their hearts on their sleeve and tend to fall fast – and hard. But these traits can potentially put some co-workers off as they want to keep it “casual”. Therefore, to avoid causing tension in the office, only 34% of Aries have had a fling with a colleague before.

Only 3 in 10 (30%) Sagittarius’s have had an office romance, according to our research. Many under this sign value their freedom, so before getting into a relationship they like to test their partners beforehand, and weigh up all options beforehand.

Ranking in tenth are Cancers with just under a quarter (22%) respondents confessing to having a relationship with a colleague, with many stating that they are too work-focused to engage in workplace romances. As a result, if anything, Cancerians are most likely to have a one-night stand as they want to avoid their personal life interfering with their work life.

In eleventh spot are Leos, with just 14% admitting to having an office romance with a colleague at work. People under this star sign are too focused on being “the best of the best” to get swept up in office romances, but that doesn’t mean that don’t like to share fleeting glances and hold eye contact with a co-worker they find attractive!

CAPRICORN – “In a Committed Relationship with Work”

In last place is Capricorns, with an impressive 91% of respondents stating they haven’t had an office fling with a colleague before! When it comes to their career, Capricorns are disciplined and won’t let anything get in the way of their success – especially romance.

Intrigued to find out more about your relationship or your love life in general? A love psychic can reveal all about what your love life has in store for you! Yes… they can really tell you whether someone loves you, or not!