What is the I Ching?

In its distinct layers, describes the basis elements of the way to enlightenment and the journey towards the positive principles of life and strategies of wisdom by providing an intuitive decision-making tool to resolve complex dilemmas. 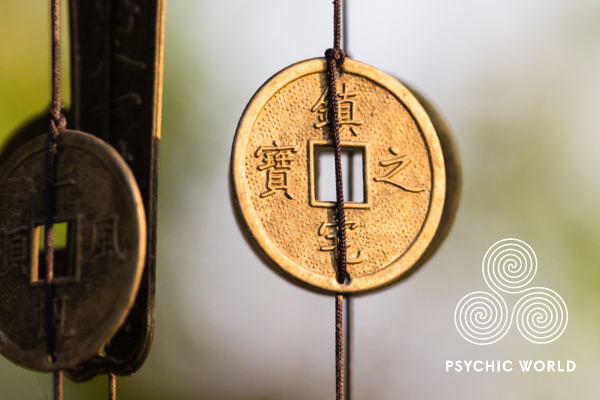 The ancient Chinese divination texts of the Book of Changes has played an important role in the development of the country’s philosophy and culture and has evolved over the course of two and half thousand years to spread across the world and become one of the foremost pieces of literature in understanding cycles and patterns of human behavior.

Its multiple uses, from a simple guide to ethical life to predicting the future, it has inspired countless doctrines and theories that have made the I Ching a source of wonder in the fields of philosophy, the arts, medicine, religion and many more.

So vast has its impact been on Chinese culture that the Book of Changes has become one of the best-know Chinese books in the world and established itself as part of the literary Five Classics that form the country’s traditional system of thought and approach to life.

The I Ching, in its distinct layers, describes the basis elements of the way to enlightenment and the journey towards the positive principles of life and strategies of wisdom by providing an intuitive decision-making tool to resolve complex dilemmas through cleromancy, by casting lots involving the use of coins or yarrow stalks that follow the oracle bone divination system that was used by rulers in the Shang dynasty.

It was originally a divination manual that progressed into a cosmological text about the philosophy of change and how the cosmos itself is an organismic entity that is continuously evolving and flows as a dynamic whole.

The I Ching today remains one of the most spiritual books in the world, helping with personal development as well offering guidance and insights into understanding and finding solutions to questions or decisions that are important at any given time.

The I Ching is a spiritual compass that encourages the stimulation of personal qualities and challenges individuals to be resourceful, creative and sensitive and to meet the challenges of life head on by aligning with the natural and universal laws and the energetic polarities of yin and yang.

History of the Book of Changes

The legend of the I Ching goes back almost 5000 years with the tale of how the hexagrams were revealed to the sage Fu Xi, however the earliest composition of the interpretations is attributed to King Wen of Zhou and his younger brother the Duke of Zhou of the Zhou Dynasty (1046 – 256 BC).

It was the philosopher and politician Confucius (551 – 479 BC), widely regarded as the I Ching's greatest patron, who took the interpretative texts to the next level by providing extensive commentaries. Confucius was primarily interested in the I Ching as a manual for how to live a life of the highest virtue by championing the importance of practical moral values.

The Book of Changes was then canonized during the Han Dynasty (202 BC – 220 AD) and through this process it was bound to a set of ten commentaries called the Ten Wings describing the I Ching as a microcosm of the universe and a symbolic description of the processes of change by which an individual can understand the deeper patterns of the universe.

The 17th-century philosopher and mathematician Gottfried Wilhelm Leibniz was one of the first western intellectuals to use I Ching and adapt some of its philosophies to his work.

He became fascinated with it and noted how there was a correlation between the manual and binary sequences of the numbers 0 and 1. Like Yin and Yang that represent polar abstract concepts. This led to the creation of his binary code and while Leibniz did not find any use for it during his lifetime, it is used today in almost every modern computer.

The celebrated sinologist Richard Wilhelm’s comprehensive translation of the I Ching in 1923 was the first real version that provided clear insight into the deeper meaning of the Book of Changes to western culture. To this day, it remains the definitive work to read for a complete understanding of the particularities of the I Ching.

His friend, the highly influential Swiss psychiatrist Carl Jung, renowned for being the founder of analytical psychology, was fascinated by this translation of the Book of Changes and the Taoist psychology within it became one of the main cultural inspirations for his work.

He saw great parallels with his research and its approach to exploring the human mind and the prevalence of the unconscious thought process. He was a firm believer in its psychological validity and value on how experiences are determined by interaction of the mind, time, space, and specific situations of action or non-action. 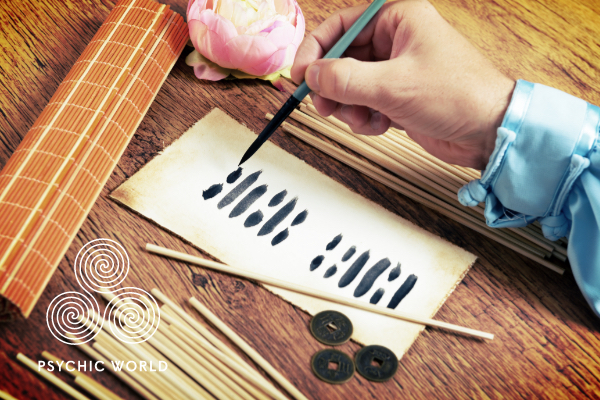 The 8 Trigrams and 64 Hexagrams

It is believed the trigrams were created by the legendary and mythical sage Fu Xi, the first emperor of China, after the arrangements representing the Lo Shu Magic Square were revealed to him one the back of the fabled winged dragon horse the Longma (modified later on to a tortoise) that surfaced on the banks of the Luo River.

It was King Wen of Zhou, who doubled the trigrams and arranged the sequence of 64 hexagrams that form the core of the I Ching today.

The 8 Trigrams represent the fundamental principles of reality, the eight interrelated symbols that correspond to a specific aspect of life and the relationship between the earth, the heavens and humanity.

A Trigram is a combination of three lines that can either be whole or broken in two. That makes a total of eight possible trigrams (2 x 2 x 2). Each trigram represents a basic natural force. Also known as the Bagua, an essential octagon-shaped tool for studying both the positive and negative energy flows in life that enables us to understand the connection between the universal laws and the five elements within a yin and yang framework.

Each of these 64 hexagrams, like the 64 chapters in the book, have a symbolic meaning with their own name and divinatory text. They are each composed of two trigrams with a single trigram being a combination of three individual lines that represent yin and yang are either broken or solid respectively.

They represent the acceptance of human finitude and the limitation humans have in shaping their environment by empowering them with the aptitude to adapt and encouraging them to pursue their goals.

The trigrams are related to the five elements of Wu Xing. The five elements or forces of Earth, Metal, Fire, Wood and Water are the fundamental elements of everything in the universe between which interactions occur. These are the philosophical principles and building blocks of life with each having a unique quality that work in symbiosis with the others.

Their characteristics, strengths and compatibility are core themes of the I Ching. Each element generates one and controls another and finding the balance between them is key. 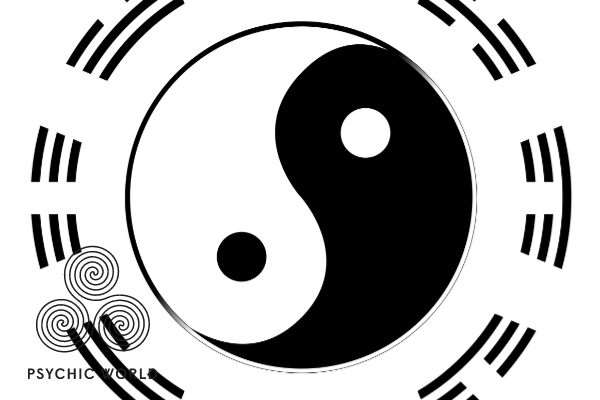 Yin and Yang is the concept of polarity, of the subtle duality of the natural world order where balance is brought to the universe and opposite energy flows complement each other to form a whole. These forces interact to form a dynamic system where one cannot exist without the other.

This fusion of two opposites creates the perfect circle. Finding that balance between yin and yang is fundamental to health and harmony. Yin and yang is the central theme of the Book of Changes.

The I Ching’s influence has been profound

Having played an important role in the development of Chinese culture, it has also had a great impact on a whole host of other fields around the world, including cosmology, mathematics and especially the arts.

A sublime example of the power of the I Ching is John Cage’s solo piano piece Music of Changes. He created the composition by asking the book questions and applying his interpretations on the 8 by 8 chart he had developed to represent the 64 hexagrams.

Although not to everyone’s taste, the structure of the piece is defined through the technique of nested proportions and continues to be hugely influential in the world of experimental classical music.

Despite the protests of Joseph Needham who saw the I Ching as a cosmic filing-system, even he could not tear himself away from the work and recognized its patterns could also be applied to the game of chess with its yin and yang pawns and 64 squares playing board. A whole offshoot of research stemmed from his study into the origins of the game in finding the correlation between it and the Book of Changes.

Consulting the I Ching

Despite the ancient method of casting involving the sorting of 50 stem stalks of the yarrow plant, nowadays the system has been simplified into a quicker and easier way that involves tossing three identical ones that have identifiable sides with heads and tails six times to create the six lined figures or hexagrams.

After the coins are tossed and sorted, the interpretations are looked up in the sacred book.

Before throwing the coins to create the hexagram, you have to be focused and have your question in mind, you will have assigned the head and tail sides with either yin or yang properties, assign the value of 3 to heads and 2 to tails.

Toss and take notes of the patterns each time. Your roll will add up to 6, 7, 8, or 9 depending on the permutation of the coins. Those values representing respectively the old changing yin, young yang, young yin and old changing yang.

Your first toss will define the bottom line of the hexagram, and you build up until the sixth toss makes up the top part of the hexagram. Once you have your hexagram, you will find the answer to your query.

Learning about the I Ching with PsychicWorld

Are you keen to explore the depth of the I Ching? To find out how you can tap into its ancient exploration of human behavior and knowledge?

At Psychic World, we have some of the leading experts versed in using the I Ching to predict the future and helping guide people through different personal situations.

Visit us today and get your own reading.